Last weeks I tried to rate some photos using open source software. I wanted to try the rating system I mentioned in a previous post and to be effective, the fist steps should be fast paced. To accomplish this I like to use the keyboard instead of the mouse. I found exactly one open source application that was able to do this out of the box, digiKam. The problem I have with digiKam is that it requires some other applications that I don’t want to have installed. Other applications either don’t have support for ratings, or don’t support keyboard short cuts, or simply don’t support Raw files. For me this was a reason to look back at Bibble. Bibble allows me go through my photos very fast and rate them by simply pressing the numbers 1, 2, 3, 4 or 5.

Another possibility that Bibble would give me is using a catalogue. A catalogue is basically a database where information about photos is stored. In the case of Bibble (and many other similar applications) this contains the Exif information that the camera stores inside the photo, like camera brand, used lens, shooting information like aperture, shutter speed and ISO, and a lot more. It is also possible to add more information to the photos such as keywords and ratings. The advantage of storing this information in the database is that it allows you to search for photos using this information.

Although I still love open source, I think the open source applications for managing photos is not that good. digiKam is the right tool for the job when you are using the KDE desktop engine on Linux, because (at least on ubuntu) a lot of KDE packages are installed when installing digiKam and this is not what I want. The only application I found that works on Linux is Bibble. Because Bibble is an extremely good and fast RAW processor and because of it’s capabilities for managing photos I have decided to buy a license for the Lite edition.

My next step is to find a good structure for adding my photos to a catalogue. Until I found a good way to organize my catalogue I can still use most of the options inside Bibble like rating and adding keywords to the photos.

Bibble is a commercial project for a complete digital workflow. Bibble Pro is one of the fastest programs I have tested. It comes in two versions, a Lite version and a Pro version. Both versions have the same functionality, but the Lite versions has more restrictions, but these are hardly noticeable when you only use it for basic manipulation of photos. When you want to work with multiple catalogues and import photos, it could be useful to look at the Pro version. but at this moment I can’t find any reasons to justify buying the Pro version. 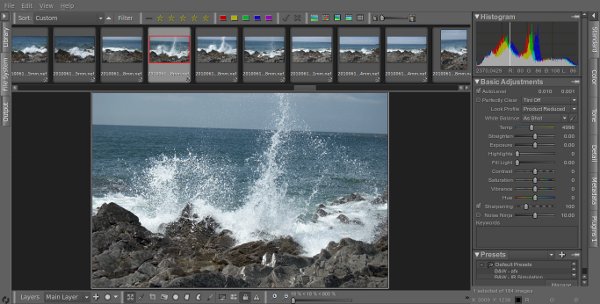 When I look to the needed and wanted features I come to the following  conclusion:

Bibble is a very solid and fast program. Al loading and preview generation is done in the background and you can easily work on a photo while other photos are loading. A great addition is that Bibble makes it possible to make simple edits to the photo. You can easily heal and clone parts of the photo, and you can create regions to make some selective changes, so you can blur part of the image, but leaving the rest of the image sharp, or make part of the image black and white. Of course these changes can also be done using Gimp, but than you need an extra editor and it take a little bit more time to do it.